The Royal Commission recommended that 17 Support and Safety Hubs (‘the Hubs’) be established, one in each of DHHS’ geographic areas, to improve the experience of people seeking family violence services.

The intention was to integrate and co-locate the three types of intake services (specialist family violence services for women, specialist men’s/perpetrator services and children and family services) which were previously managed and delivered mostly through separate organisations and premises. The Hubs have been branded and promoted under the name ‘The Orange Door’.

Figure 5a: The Orange Door Logo

The Hubs were a focus area of the FVRIM in 2018 and formed a significant part of the Monitor’s second report to Parliament.16 At the time of that report the first five premises for The Orange Door had very recently opened. Non-government sector stakeholders felt it was important to continue monitoring to see how this iconic and high-profile element of the reform was progressing. They also recommended that the FVRIM consider how The Orange Door was engaging with perpetrators of family violence. During the first half of 2019 FSV received its independent evaluation report and Domestic Violence Victoria completed a position paper on The Orange Door, both of which raised some matters of concern (discussed below). In this context, the former Monitor decided to continue to monitor the implementation of The Orange Door.

In May 2019, the Victorian Auditor-General’s Office (VAGO) advised that it was commencing a performance audit of the Hubs. The FVRIM subsequently contributed its draft monitoring plan into VAGO’s audit planning, responded to its information requests and reduced the active monitoring activities around The Orange Door until VAGO had completed its report, which is due for tabling in the Victorian Parliament in May 2020.

The Orange Door is currently operating in five areas, as follows:

The Orange Door is planned for opening in three further areas during 2020, with the remaining nine areas scheduled to open their premises by the end of 2022. The Royal Commission’s recommendation that it open in all 17 areas by 1 July 2018 was a very ambitious timeframe. It did not account for the challenges in bringing together three workforces who had not previously worked closely together, nor with securing and fitting out appropriate facilities in the necessary locations.

Figure 5b: Locations of The Orange Doors - existing and planned 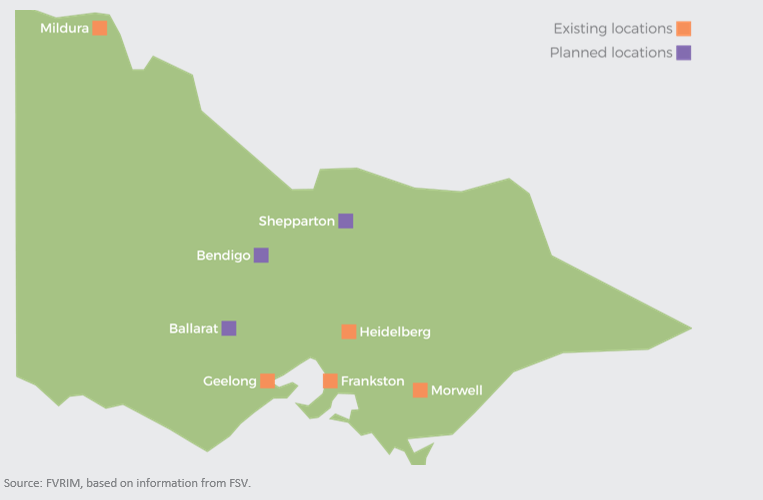 FSV has led the work to implement The Orange Door initiative since July 2017, with DPC doing the early work. FSV has committed to learning and evaluation during the implementation, including keeping a register of ‘lessons learned’ that resides with the project steering committee and commissioning an independent evaluation of the opening of the first four premises (discussed below). That steering committee includes representatives from government agencies with an interest in The Orange Door initiative, including Victoria Police, the Magistrates’ Court, DHHS, DJCS, DTF, DET and DPC.

Source: FVRIM, based on information from Family Safety Victoria

*Note:'Revised planned' dates for the first five Orange Door areas are taken from baseline dates within Sycle (the project reporting system used for this reform) as at 10 January 2018. 'Revised planned' dates for the remaining areas were approved by the Minister for the Prevention of Family Violence on 7 June 2019 and The Orange Door Steering Committee on 12 September 2019.

The opening of The Orange Door in the next three planned areas has been delayed by protracted lease negotiations and difficulty locating appropriate premises in announced areas. Recruiting staff with sufficient experience and coordinating with other reform elements, such as MARAM and SFVC are also acknowledged as risks to service commencement and have been built into the critical path plan for each area. The recruitment risk is actively managed by FSV’s manager in each area together with the Leadership Group comprised of managers from the co-located services.

The Orange Door model involves staff from at least three different organisations working together but maintaining their employment arrangements, including formal line management, with their own organisations. A manager is also employed by FSV to provide additional management and oversight. While the day-to-day administration of these employment arrangements may be complicated, it appears to be progressing well.

The bigger challenge with implementing and maturing the model is that it requires three different workforces to work in an integrated way, those specialised to work with each of victims of family violence, perpetrators of family violence and families) that each have their own practices, philosophies and risk frameworks. Sector stakeholders have reported a lack of clarity over whether staff are expected to be generalists working with all three groups, either in the short term to smooth demand issues or as part of the longer-term maturation of the model. These stakeholders have reported that workers have been working outside their specialisations from time-to-time. A clearer plan for how The Orange Door will upskill staff where they are required to do work outside the scope of their practice and training in periods of peak demand would be beneficial. Additionally, sector stakeholders have indicated a desire to be better informed about how and when The Orange Door will mature beyond the foundational model currently in operation. It remains early days for The Orange Door and practices will continue to develop over time. The Orange Door Workforce Strategy and Action Plan developed during 2019 outlines a range of activities, under five defined priorities, to support staff as The Orange Door’s service model evolves.

The independent evaluation of the first four premises for The Orange Door (discussed below) noted that all foundational documents produced to date, such as a concept paper and operational guidance, are ‘not well understood or used by practitioners’ and that ‘operational translation’ of these policy documents needs to be ‘co-produced with practitioners’.17 This will be an important matter to resolve in the ongoing implementation of the service model.

The Orange Door was one of the first services to be aligned with MARAM as it has a platform called Tools for Risk Assessment and Management (TRAM) integrated into its client management database.

Review and evolution of the model

The report from the independent evaluation commissioned by FSV of The Orange Door in the first four areas was presented in May 2019. The evaluation recognised that it was very early in the implementation of The Orange Door and the practice was still developing and noted a very strong commitment from organisations and professionals involved to make The Orange Door successful.

The evaluation was not able to assess client experience of using The Orange Door, which represented a major gap in understanding The Orange Door at the time of the evaluation. FSV has since been pursuing a range of activities to engage victim survivors and people with lived experience of family violence services in the development of The Orange Door, including testing the client experience of an upgraded call management system, informing the development of the interface with legal services and contributing to the design of Aboriginal Access Points. From July 2019, a paper-based survey to collect client experience and feedback has been introduced. This should provide important information that should be used to inform the evolution of the service model.

The integrated practice challenge was a major focus of a position paper published in March 2019 by Domestic Violence Victoria, the peak body for the specialist family violence services for women and children. The paper collated its member organisations’ experiences and concerns with implementation of The Orange Door together with other key stakeholders representing men’s and children’s services that are a part of The Orange Door. The contributing organisations and their relevant members are all represented on some of the governance groups overseeing The Orange Door’s implementation, but they reported that they did not feel that these mechanisms had allowed them to communicate their concerns sufficiently.

FSV advised that none of the current governance groups had the capacity to work through the implementation issues raised in the paper. This was because they either did not have sector representation or were too large to undertake such a role. FSV has subsequently established a new group, ‘The Orange Door Working Group of the Statewide Reference Group’ which has been meeting regularly during 2019 and has an advisory role to the Statewide Reference Group which represents all the agencies and peak bodies with an interest in The Orange Door.

It will be important that the new group’s Terms of Reference, which are currently being finalised, are clear about how its work is connected to decision-making functions around The Orange Door. This might be achieved either through its membership including relevant staff and executives or by clearly connecting it with those governance groups that have decision-making roles, or both.

While the above hurdles can present difficulties, they should not be unexpected given the enormous task of establishing a new model for delivering services. The service designers and providers are monitoring progress closely and working in partnership to address the various issues that arise as the service evolves.